We are very proud to announce we won a Yorkshire Life Food & Drink Award!

The “Local Producer” award was won by Chris Wildman, Yorkshire Dales farmer and business man as part of the annual Yorkshire Life Food & Drink Awards 2011-12, which celebrates the best of Yorkshire’s food heroes.

Chris was presented with his prize at an award ceremony luncheon held at Hotel du Vin in Harrogate on Monday the 19th September along with other Yorkshire chefs, hoteliers and producers.

The judges were obviously impressed by the product, not widely found in the Yorkshire Dales. Yorkshire Chorizo is rapidly becoming a favourite amongst some of the region’s best chefs and is to be found on the shelves of retailers and markets around the county.

Chris, who comes from a long line of butchers, is a dedicated foodie and is behind Paganum Produce, an on line farmers market, as well as being part of the recently launched Yorkshire Dales Food Network. Operating from a farm in the Yorkshire Dales, Chris has appeared in demonstrations and at numerous food festivals to spread the word and popularity of his Yorkshire Chorizo and is grateful for some well deserved recognition.

Chris said “It’s great to receive such a prestigious award and I’m very flattered, especially considering the competition. There is some amazing food produced in the Dales and the rest of Yorkshire and we’re proud to be a part of it.” 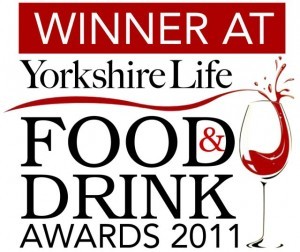