Yorkshire Chorizo is a fully cured sausage containing British Pork & made here in Yorkshire, it can be sliced and eaten without cooking or used in your favourite recipe. 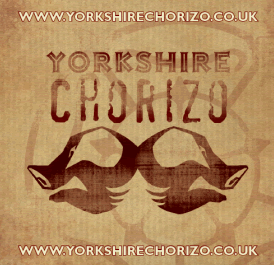 Due to culinary tradition in South America, and the expense of imported Spanish smoked paprika, Mexican chorizo (and chorizo throughout Latin America) is usually made with chili peppers, used abundantly in Mexican cuisine.  In Latin America, vinegar also tends to be used instead of the white wine usually used in Spain.  In Spain and Portugal the sausages are usually encased in intestines, in a traditional method that has been used since Roman times. In Latin America they are usually encased in artificial casings, have a smooth commercial appearance, and artificial colourings are often used.

Chorizo can be eaten as is (sliced or in a sandwich), barbecued, fried, or boiled.  It also can be used as a replacement for other meat ingredients and brings with it a very distinctive flavour.

Our customers have come up with a wide variety of recipes, some of which you’ll find on the site.